Of all cars I’ve owned, I think this car had the highest LBQ. 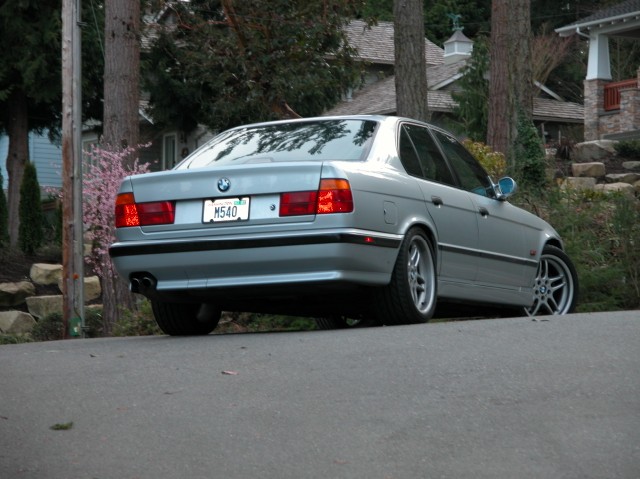 I took this picture as the car left my driveway for the last time: March 11, 2006. About a year later it was totalled by a city bus. It’s parts were later used to build a US E34 M5 Touring.

Someone asked me why I like the E34 540i so much? Why in the world would I spend so much time trying to find the silver 540i Sport pictured above? Read the text on LJ Video’s web site. This guy sums it up very nicely when he says.

The 540i reminds me of the muscle cars of the late sixties, but with the refinement of a grand European touring car. It accelerates like an electric knife through butter putting more than 280 horses under your foot. Unlike the old road-burners, you know who is in control with an incredibly sure feel of the road. There’s no wasted smoking of tires and ungodly noise of banging valves while you fishtail down the road – just silky smooth forward thrust that pushes your body into the infinitely adjustable leather seat.

Why not a new E39 ///M5? First is looks. While I think the new ///M5 is nice looking (while continuing to be "stealth"), I really prefer the looks of the E34 5-series. Probably for the same reason that I prefer the look of the 83-89 Porsche 911s over the later models (see my ‘88 in the picture above). Next is cost. I spent half as much as I would have on the new ///M5. Sure the ///M5 will beat my car in most performance respects, but not by much, and performance is not the number one factor for me.

The US 1995 BMW 540i Sport 6-speed is a very special car. Only 135 were made. See my 540i Sport& Info page for a comprehensive explanation.& After I bought my 540iA used in 1997 and began learning about BMWs I realized that what I really wanted was a 6-speed. I loved my 540iA, especially after putting 17" wheels and lowering springs on it. However, I really didn’t like the automatic and wasn’t all that fond of the dark green color (my father had always told me that German cars are supposed to be silver). For a year and a half I kept my eyes open for a silver 1995 540i 6-speed. I had two dealers in the area looking for me as well.& Then, in the September 1999 Roundel I saw the ad. A 1995 540i Sport 6-Speed with 40K miles, mint condition, in San Antonio Texas. Without even thinking (or asking my wife for permission ) I called the number. I only vaguely knew at the time what a 540i Sport was, but the owner had pictures of the car on the web and as soon as I saw them I knew I had found my car.& However, I had never purchased a car “remotely” before so I did some research. What I mostly found out was that very few people knew what a 540i Sport was (including the local BMW dealer…they insisted that no such option ever existed!). I also found (by searching the online message boards) that there was quite a bit of confusion about the car. But the information started to come together. I had a faint memory of reading a Car & Driver article (PDF File) from early 1996 so I looked that up. I found all of David Chen’s documentation. An so on. To “fix” this state of confusion, I created my 540i Sport& Info page which brings all this data and information together. I had a business trip coming up, so I arranged to fly back through San Antonio and do the deal (coincidentally on my birthday). I arrived in San Antonio in the morning and the owner of the car picked me up at the airport. That was when we discovered that it was both of our birthdays’.& By the afternoon I had driven the car a bunch, eaten some great TexMex with the previous owner after closing the deal, and had watched the car being loaded onto the transport for it’s trip back home. 18 days later (roughly the amount of time promised by the transport company) the car arrived here in Washington state.& After driving it here for a few days I am BLOWN away with how completely different it is than my 540iA. I loved my 540iA, but the Sport is orders of magnitude more fun and better driving. My 911 is getting jealous.& Even my wife likes it. In fact, she prefers to drive it with the suspension in sport mode! I can now say, without reservation, that the price premium for the Sport package is completely worth it. The EDCIII+ suspension, the M5 Servotronic steering, the M5 brakes, the sport seats, and the 6-speed all combine to make the ultimate 540. Add to this the 25 or so additiona HP the motor has due to the JimC chip and the Dinan High Flow Induction tube and you have a car that simply blows away my “tuned” 540iA. I’ve had fun comparing the two cars side by side. They are both 1995 model year cars. However the 540iA was built 7/94 (an early ‘95) and the 540i Sport was built 10/95 (BMW should have saved everyone a lot of confusion and just called these cars ‘96es). Many of the engine accessories are different. The radio is different (it has a “weather band” button and the numbers on the preset buttons light up green when selected on the newer car. Kinda like Porsche, constantly improving during the production run…newer cars are always better.

Found that there are a few scratches on the rear apron. Looks like someone backed into a curb. You can’t see them from a distance, but when you’re up underneath there waxing… Other than that and a few very minor rock chips on the hood and right front fender the finish is perfect.&

Above I said “I had a faint memory of reading a Car & Driver article (PDF) from early 1996 so I looked that up.” Yesterday I was going through an old box in my office and found a stack of magazines. I don’t save magazines unless they have something really good in them. I quickly determined why I had saved most of them, but the lone Car & Driver had me confused…until I noticed that it was the February 1996 issue! I had saved that issue because it had the article on the “Fast Fives” that described “my” car. The one pictured in the article is Arctic Silver with the Light Silver Gray interior! Hmmm….

Took the car in to www.stongard.com today to get their great protective material applied to the frontal areas and headlights. If you take care of your car and hate the idea of rock chips and broken lights I highly recommend you get this stuff put on. I’ll post pictures when I get a chance.

First, in November I purchased a set of 18" M-Parallel spoke wheels. These are the wheels that were available on the 1995 European ///M5 and Canadian ///M540i (see the pictures of David Chen’s ///M540i and this picture of a European ///M5). The specs on these wheels are (18x8-20mm offset front and 18.9R-22mm offset R). I have still not purchased tires (245/40 R18) because I waiting for the weather to improve. I received an excellent price and fantastic service from Pacific BMW in Glendale, CA (they charged me almost half as much as the local BMW of Bellevue wanted, and really took care of me. Give them your patronage!)

Second, at the same time I purchased a set of Blizzak MZ-01 (235/45Q R17) winter ice tires and have mounted them on the stock throwing star wheels. This coupled with the addition of the trunk-pass through ski-bag (also purchased through Pacific BMW) allows me to go skiing when my wife won’t let me use her ML320. These are very interesting tires. They definately negatively impact the performance of the car. They feel very soft in the sidewalls and I am careful not to drive the car hard with them. While I’m loving ski season, I can’t wait for spring so I can mount my M-Parallels!

As the original factory warrantee is just expiring I have been making sure that all the little problems get fixed by BMW of Bellevue. They’ve had a very tough time fixing the AM radio which clicks while the LED on the dashboard is showing the recently tuned station (my 540iA did not do this). Still not fixed after 3 visits. The mirrors worked fine manually, but their positions were not being remembered by the seat memory system. Took 2 visits to finally get this repaired. The last item they are still fighting with is my ignition switch which doesn’t always work. In the meantime they screwed up the connection from the CD changer to the deck and now the CD changer cuts in and out….I’m taking it in next week to have them fix all this one last time and then I will NEVER patronize them again. The only reason I was using them was for the warantee work and their location.

Oh, and I am NOT selling the 17" Turbine-II wheels. Don’t bother asking.

This Flickr album has a bunch of pictures of the car with the new wheels.

As usual, there’s a story to tell. I took the wheels down to a local independent to have them mounted. While they were taking off the left-rear the mechanic called me over and explained that he thought one of the lugs was stripped. Whoever had last put the wheel on (BMW of Bellevue, ahem!) had cross-threaded the lug. Now where I come from, it’s awfully hard, even with an impact wrench, to cross-thread a lug and not notice. So the moron at BMW of Bellevue had not only done it, but figured he’d get away with it without telling me.&

The good news is that the mechanic at my independent was able to back the lug out without it breaking meaning that it wouldn’t have to be drilled out. Repairing it would be a matter of tapping new threads in. I choose to drive around for a few days with only 4 lugs on that wheel so that when I took the car in to BMW of Bellevue for my final visit the following Monday (it had already been scheduled) they could face up to it and fix it.

I drove the car to work from the shop and then home that evening from work. I got out of the car and walked around it to admire the new wheels and…holy ****…the right rear tire was FLAT! Completely. Arrrrggg!!!! I prayed that the wheel had not been damaged on the way home.&

I put the spare (a 17" Turbine-II without the cap) on and took the flat tire and wheel into the shop the next morning. The called me later in the day and informed me that it wasn’t some sort of defect but I had actually hit a nail. I drove on that tire maybe 4 miles total! To make things worse, the shop had to order a new tire and I had to drive with the spare for 3 days. What rotten luck!

Now it’s about a week later. I’ve got 4 S-02s without any holes in them on the car. BMW of Bellevue fixed the lug and threw in a set of BMW wheel-locks to try to make me feel better (I don’t). All of the problems that I was having that BMW of Bellevue are finally fixed (at least I’m crossing my fingers).&

I updated the site with info on how to identify an “M-Sport”. Nothing new to report other than I still love the car!