I frequently get emails from people wanting to know if a ‘95 540i they’ve found is really one of the rare “M-Sport” cars. Many people have taken standard 540is and bolted on all sorts of aftermarket parts trying, creating “fakes”. If you’re looking to buy a 540i “M-Sport” and want to be able to tell the real-deal from an impostor, this page should help.

The table on the main page shows how the standard ‘95 540i, the 540i M-Sport, and the Canadian ‘95 M540i compare. You can use that table for reference, but the information below boils it down as a quick guide.

If you see a 540i on the road, you can quickly ID it as an “M-Sport” by noticing two things: The mirrors and the spoilers/skirts. Many people have “upgraded” standard 540is by adding BMW or aftermarket Turbine II wheels, so don’t use the fact that it has Turbine II wheels as your only clue. 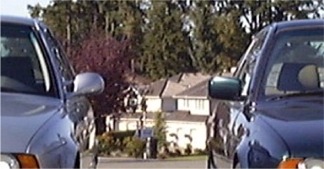 Standard 540is and all M5s sold in the US have rectangular shaped mirrors like those shown on the green car in the picture to above.

“M-Sports” all come with the M5 ovoid shaped mirrors, identical to those found on the E36 M3 and the 1995 (European) M5. These are shown on the silver car in the picture above.

The picture on the left above shows the M5 front spoiler and the picture on the right shows a standard 540i. The M5 spoiler has a much more aggressive lower lip, air intakes for the front brakes below the fog lights and a horizontal grill that spans the midsection.

This picture shows the M5 rear apron. Notice the “lip” on the bottom. The standard 540i has no lip but is rounded.

The picture on the left above shows the Turbine II wheels that came standard on the ‘95 M-Sport. These are the same wheels that came on the M5 (except the 1995 European M5 which had M-Parallel wheels). These are two piece wheels where one piece is the actual wheel and the other is the center cap. The center cap is “directional” meaning that they are different on the left and right sides of the cars.

Many people have “upgraded” standard 540s with aftermarket “Turbine II” wheels. I have no idea what the quality of those wheels are but I do know they do not have directional center caps and you’ll find that on one side of the car the wheels “rotate the wrong way”.

An interesting side-note (mostly to Porsche fans) is both wheels were made by Fuchs in Germany and have the fox ink stamp on the original spares.

When the M-Sports left the factory they all had standard “540i” rear badges. It appears that most dealers removed these badges and replaced them with a “///M” badge like my car has (or had, I’ve since removed it) as shown above.

Some people have obtained the “///M540i” badge that came on the Canadian ‘95 M540i and you may see one of these. I’ve personally only seen these badges on real Canadian M540i cars. If you see a car with one of these badges on it, you probably are looking at a VERY rare car.

If you can get inside the car you are looking at you can use the pictures below to identify M-Sport unique components including the sill plates, shift knob, steering wheel, and EDC computer.

All four doors have ///M sill plates on the M-Sport.

The 6-Speed variant of the M-Sport has the ///M shift knob and ///M steering wheel with red and blue stitching.

One fast way to tell the difference between a “real” 540i Sport and a “fake” is by looking for the EDC switch next to the fog light switch. The switch is labeled “EDC” and can be in either the “S” position (for sport mode) or “P” position (programmed). 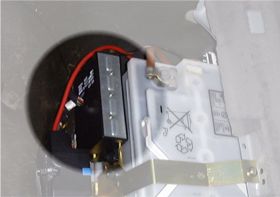 Pull the rear seat back out and look for the EDCcomputer next to the battery. No one would fake that.

The engine bay of a 540i M-Sport is identical to that of a standard 540i. It looks just like the picture above (although it may not be as clean as mine).